Hall of Famer Goes the Extra Mile – From Buffalo to Canton! 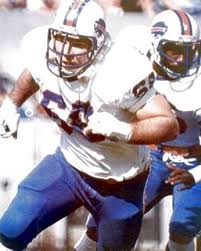 Buffalo, NY July 1, 2013 Pro Football Hall of Famer, Joe DeLamielleure has always been known to fight for the underdog. Joe “D” is one Hall of Famer who not only “talks the talk” but also “walks the walk.” In this case we are talking and walking literally.

Joe “D” is at it again. As if a 2000 mile bicycle ride to raise support for an orphanage wasn’t enough when in 2009, Joe along with two of his former Michigan State teammates John Shinsky and Eljay Bowron embarked on a bicycle trek from East Lansing, Michigan to Matamoros, Mexico.

Now Joe “D” has taken on a new challenge. This time he he will be using his feet instead of a bike. Joe is a man who never backs away from a cause that he believes in and will usually become the “lead dog” in the fight. But this particular cause is one that Joe feels so very passionate about – kids who need prosthetics!

On Wednesday, July 10, 2013,at 10am, Joe “D” will begin a grueling 213 mile walk, starting at the 50 yard line of Ralph Wilson Stadium in Orchard Park, NY, and ending on the steps of the Pro Football Hall of Fame in Canton, OH, on Saturday, July 20, 2013. The goal of Joe’s walk is to raise awareness and support for the GRACE’S LAMP organization of Charlotte, NC. This amazing organization deals with young children who grow out of their prosthetic legs but cannot afford the high cost of new adult prosthetic legs. 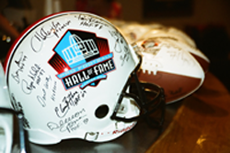 “I consider myself a very blessed man” said the 62 year old Hall of Famer. “I am walking to bring awareness and help support those young people who might not be able to walk,” added DeLamielleure. In 2013, Joe will be celebrating his 40th year of first entering the NFL as a Buffalo Bills #1 draft pick, and also his 10th anniversary of his induction into the Pro Football Hall of Fame.

Grace’s Lamp Foundation is a charity that young Joey Funderburk of Charlotte, NC, and his family started to help Joey and others like him receive the medical treatment that they need, and also to help other families adopt children. When they originally started raising funds to get new prosthetic legs for Joey, they had no idea they would see such an incredible outpouring of love and generosity for Joey’s needs. Everyone was so kind and encouraging, that they soon realized they could not just sit back and accept all these blessings without doing something to help others in similar situations. Grace’s Lamp was established to help families adopt children, go on missions, and get the medical treatment that they need.

To donate and help this cause please visit: